Although his solo exhibition has been postponed until 2021, we would like to take this opportunity to introduce an interview with Mr. Yonemura and his new works.
Although it is on the web, we hope you will enjoy reading it as if you were at the exhibition.

-Please tell us about the theme of your new work.

As the subtitle says, the word “intersection” has the meaning of “a mixture of several things.

For this solo exhibition, I am conscious of two “intersections.

-What is it about the interplay of gazes that is so important to you when painting people?

I use the word “intermingling” to describe this situation. 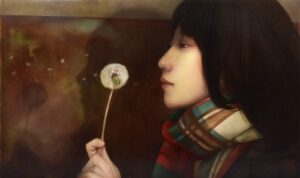 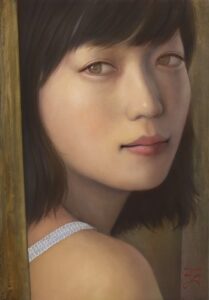 There is also an interplay of gazes within the exhibition space.

I believe that the direction of the painted figures’ gazes is an element that can encompass and make us feel emotion and narrative.

For this exhibition, I was particularly careful about the direction of the gaze of each person in each work, so I thought their gazes would intersect in the exhibition hall.

First of all, I would like viewers to look at the works at their own discretion.

-This is your first solo exhibition in about two years.

Until now, “accumulation of time” was my perspective when painting, but now I have added the nuance of “growth” to that, and my perspective in painting people has become clearer than before.
-Why is that?

People grow over time, but growth can include not only steady progress but also regression.

I have come to feel a “human touch,” in a good sense, in the way that progress and regression intersect and each person is searching for a way to accumulate time.

-Have you come to think about such things from your own experiences and so on?

As a teacher, I have often worked with children, and including my volunteer experience as a student, I have been involved with children from elementary school to university students for about 15 years.

In working with them, I often see people grow.

Of course, there are areas where I still want to grow as well.

In that sense, perhaps I am more attracted to the trial-and-error attitude of people trying to grow than to the growth of children.

In addition, although it may sound nervous these days, I feel that the swing in growth is greater for girls than for boys.

For example, while girls are having mature conversations about having a new favorite child, boys are still talking about video games (laugh).

There is a gap between the childishness and maturity of the girls, which makes them seem more dramatic, and I think it is partly because they are portrayed as female figures.

– “Growth” is a new theme you have added to your work. What was the inspiration behind the original theme of “accumulation of time”?

It goes back to when I was a university student. When I thought about what I wanted to depict as a theme, I thought of “life and death.

Where did I come from and where am I going… I think this is a common theme among students, but when I thought about it, I realized that my parents are alive and well and my grandparents are still alive and well (laugh).

(laughs) I never had the opportunity to come into contact with the idea of life and death.

But the things I have accumulated and continued to do up until now do not betray me.

I wanted to depict the accumulation of such moments.

It goes back to what I mentioned earlier when I was involved with children in my life as a teacher.

I also like antique motifs that remind me of the passage of time.

-Has there been any change in your work?

There was a point where I had become accustomed to the way I had painted in the past, so I used painting materials I had never used before in search of stimulation, and I changed the color tones of the screen and the base material, playing with them on the screen more than before.

-What exactly do you do?

I tried a method of applying a base of acrylic and oil paints sprayed with an airbrush and then adding oil paints on top of it, mainly in “In Between” (S30).

Acrylic paint is an art medium that presents many challenges when used in combination with oil paint, but it can create a blotchiness and touch that oil paint alone cannot express. 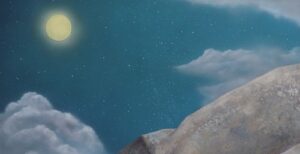 S30 “In Between” S30 The clouds and other parts are mainly used for backgrounds. 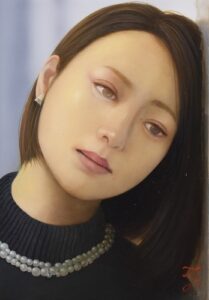 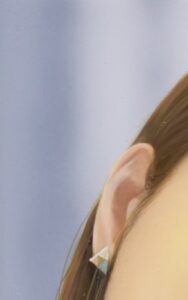 Acrylics are good in that they can be painted thickly, but can be blurred softly like an ink painting.

I also use a “blur brush” as shown in the photo in some cases. 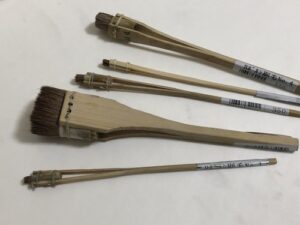 I use this kind of blur brush and airbrush to create my paintings through trial and error.

-What kind of image did you have in mind when you painted “In between” S30, which incorporates a landscape?

I asked the model to pose on a rocky place in Saga for the interview.

I imagined the present moment between the past, which has been changed by the way each of us has accumulated time, and the future, which will continue to change.

When I returned to Saga for the first time in a long time, I thought the sky was very wide.

Tokyo has many buildings and structures, but even in Kumamoto, my hometown, there are not many views like this.

The rocks and the sky were so close together that I felt as if they were one.

I include landscapes in my works because they overlap with my themes, such as the mossy feeling of rocks and the waxing and waning of the moon, and because there are many attractive aspects of nature that are only possible through the passage of time.

-Is there anything new you would like to try in the future?

I would like to try painting works in which I am conscious of the strength of the physical presence of the picture itself, rather than the content of the picture.

-What do you consider to be the “strength of physical presence”?

I think it is being able to show the materiality of the painting materials, including oil paints.

I admire works in which the unevenness, matiel that seems to have been consciously smoothed out, and the thick texture of the paint are vectors of beauty that are different from what is painted.

It was a long time ago, but when I returned to Saga University as a faculty member, they preserved a work I had painted back then.

It had been seven years since I had seen that work, and I had done a lot of things on the screen, including pasting metal plates on it.

I realized that this is what I had wanted to do for a long time.

Although most realistic paintings are flat, this made me want to create works that go back to my roots.
Also, recently I have been painting works like this. 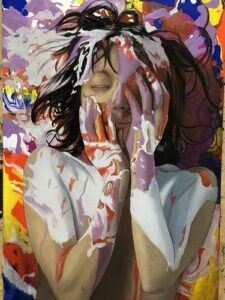 It is still in the process of being in progress….

In the base, I am marbling with a mixture of poling medium and acrylics.
I would like to paint this as part of the “MEISAI” series. 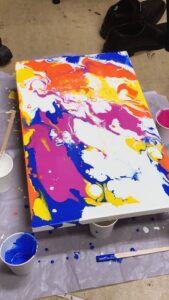 Marbling
Marbling is a technique for copying complex patterns and designs drawn on the surface of water onto paper and other supports by dropping a drawing material that repels moisture into an aqueous solution of rubber resin. This technique is said to have originated in Turkey around the 15th century and has been used for decorative paper for books.

-Lastly, please give a message to the viewers of your works.

I painted the figures with a conscious effort to make their gazes have some kind of intention.

The way you look at the paintings will also carry a new “intersection,” so I hope you will be able to sense the intention of the works as you view them.

-Thank you very much, Mr. Yonemura!
You can also view the works on our website
→https://s-art-web.com/sakka/profile/500.html