We talked to Yonemura-sensei, whose solo exhibition will be held at Gallery Seek from August 27th! In this solo exhibition, we will introduce her new series “MEISAI”.

The work depicts modern people with ambivalence, tossed about by an overflow of information and values, replaced by figures buried in various colors.

(1) Cover the panel with cotton cloth and make the base with acrylic paints.

(2) The preliminary drawing and the depiction of the first layer (I put it down while thinking about the colors necessary for the completed form).

(iii) Second layer of drawing (the underdrawing becomes almost invisible, and the interaction on the screen becomes the main part of the work)

(4) Breaking (applying opaque paint to the entire screen or parts of it, in the hope that it will be accidental or trigger a new impression)

(5) The third layer of the drawing (I reconstructed the screen while making use of the destroyed screen. I also begin to describe the details.)

⑥Finishing (coloring and detailing while working toward completion)

■What inspired me to draw the MEISAI series

I felt like my solo exhibition in Saga Prefecture in 2019 marked a break in the series I had been working on until then, which was based on the theme of “the flow of time”. It may have been partly because my situation at the time had come to an end, but it also gave me a chance to look at the world and myself once more, as it was a relatively natural decision to start working on a new theme. 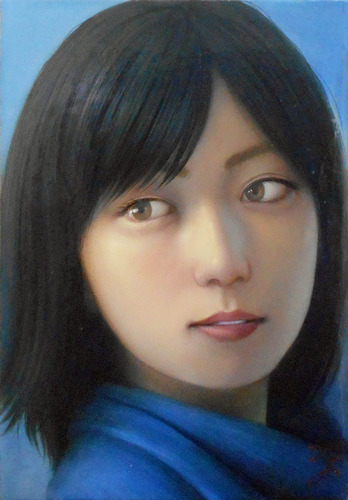 Flow of Time” series: “Blue TimeSM
I intend to continue with the Flow of Time series, so I wanted to vary the colors I use and my approach to the work. I have always wanted to depict modern people who are forced to somehow read the atmosphere while being aware of the reactions and complexion of those around them, but I decided to create a work on this theme because of the recent situation of the Corona disaster and the way we are being swept up in the information about it, combined with the way we are beginning to feel crunched. In addition, I have been using both acrylic and oil paints in my own works more and more, and I realized once again how interesting the difference in the texture of each material is, which is highlighted when I put the different types of painting materials together on the canvas. I was wondering if I could create a work that would show the fluidity and hardness of acrylics and the thickness and viscosity of oil paints. It doesn’t quite work out the way I want it to, but there is room for trial and error, which is exciting. 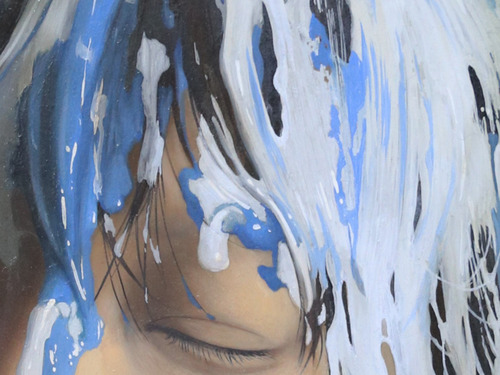 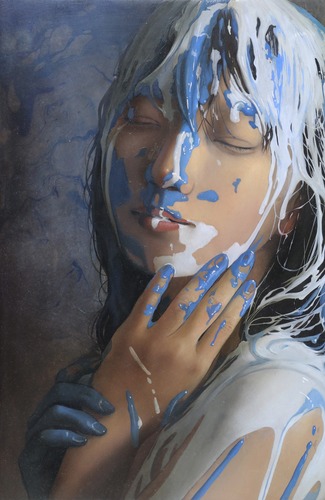 ■Themes that bleed into facial expressions

The facial expressions may be the key to any of the works.

I didn’t exaggerate too much, but I tried to make the comfort and discomfort of being buried by the masses, which is also the theme of my work, show through in the expression of the work. 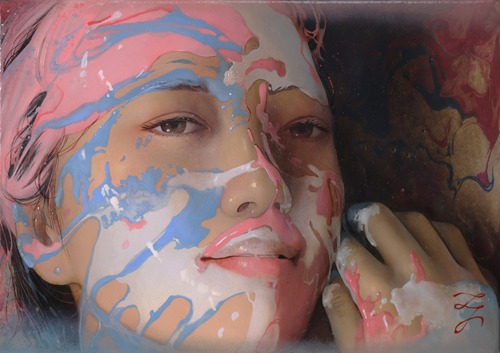 I’m still exploring the possibilities of this series myself, so right now I’m just happy to be able to actively use more vibrant colors than in my previous works, and I’m enjoying the various color combinations (laughs).

In the future, I would like to paint works in which the colors have concrete meanings.

Thank you, Dr. Yonemura! The exhibition will be held from Friday, August 27th to Sunday, September 5th.

IntervieInterview with Taichi Yonemura 2020 with Taichi Yonemura 2020一 Oil Painting Exhibition -MEISAI-」Friday, August 27 – Sunday, September 5venue：Gallery Seekexhibiting artist：Taichi YonemuraTaichi Yonemura depicts the flow of time, sometimes fleetingly, sometimes gracefully. In this solo exhibition, he introduces his new series, “MEISAI”, which he has been working on since last year. The series is characterized by the figure of a person buried in various colors, expressing the ambivalence of modern people who are tossed about by the information and values overflowing in the world, and have “a sense of anxiety to be buried in the surroundings” and “a sense of relief to be buried in the surroundings”. By highlighting the unevenness of the surface, the matiere which seems to have been smoothed consciously, and the thick texture of the paint, the series also finds beauty in a different vector from that of the painted object. Please come and see the artist’s new series of paintings.